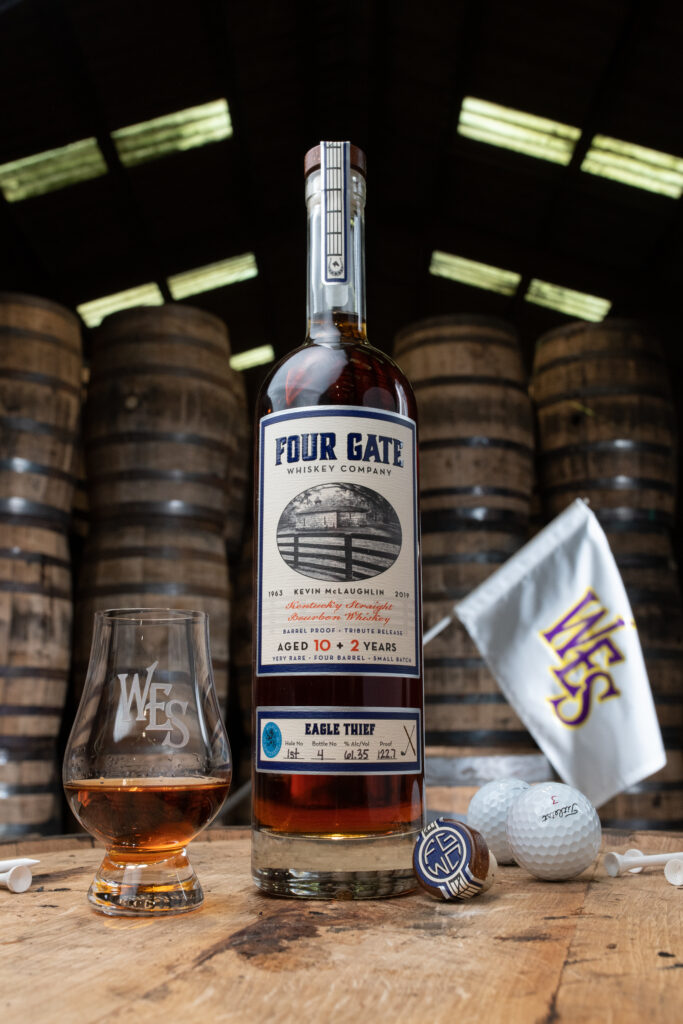 Four Gate Whiskey Company is paying tribute to the late Kevin McLaughlin of Kelvin Cooperage, who passed away in December of 2019 with a special tribute release funding a  donation to Kevin’s charity of choice- West End School of Louisville.

Kevin McLaughlin ran Kelvin Cooperage with his brother, Paul, after their father founded the cooperage in Glasgow, Scotland in 1963. Kevin passed away December 27th, 2019, after a courageous battle with cancer.

Kelvin Cooperage has collaborated with Four Gate Whiskey Company from the start, and Kevin was a good friend of Chief Barrel Officer Bob D’Antoni. The company only thought it fitting to honor Kevin with a special release.

“Kevin was such a great guy and great friend. He was so instrumental in our success that I felt like this was something we had to do,” Said D’Antoni.

Kevin was an avid and skilled golfer, who played collegiate golf at Pepperdine University, where he captained the golf team. As such, much of the labeling of the batch are tributes to Kevin’s golf game and the cooperage he ran so successfully.

“The label was such a labor of love from Bobby (D’Antoni),” said Chief Blending Officer Bill Straub. “It’s really thoughtful and creative at the same time.”

Special thanks and recognition must be made to all involved. To maximize the contribution to the school, Republic National Distributing Company, Sterling Cut Glass, Resource Label, and White Dog Trading and Storage all agreed to participate at lower margins to make this batch a reality, including all participating on-premise retailers and online sellers- Seelbachs.com and Bourbonoutfitter.com.

“Everyone at Kelvin Cooperage is overwhelmed by Four Gate’s Eagle Thief Release in honor of my brother, Kevin McLaughlin,” Said Paul McLaughlin. “He would also have enjoyed having his +2 handicap widely publicized!  The fact that everyone involved in the project is donating profits to Kevin’s favorite cause – The West End School – is a lovely bonus.”

Straub and D’Antoni run the company as the Chief Blending Officer and Chief Barrel Officer, respectively. With their roots in Louisville, Straub has leveraged his knowledge of bourbon and the industry as founder and Editor-In-Chief of ModernThirst.com since 2014. As a successful local entrepreneur, D’Antoni has used his connections to establish relationships to get his hands on some terrific bourbon.

A local collaboration like this feeds into the Four Gate Whiskey Company philosophy: if you start with the best whiskey, and leverage some of the best-regarded experts in the field on the effects of barrels, you wind up with an amazing whiskey that both connoisseurs and collectors alike will appreciate.

There are 423 bottles of this release available in November in Kentucky and online through Seelbachs.com and BourbonOutfitter.com at a MSRP of $299.

Four Gate Whiskey Company started in 2018 with the goal of releasing several unique batches of whiskey products each year. With its first product launch of 11-year-old Kentucky Straight Bourbon Whiskey finished in sherry-rum casks in April 2019, the team is excited to unveil the other small batch products with unique finishes in years to come. Learn more at fourgatewhiskey.com, like us on Facebook.com and follow us on Twitter @four_gate.

Kelvin Cooperage, founded in Glasgow, Scotland in 1963 and now based in Louisville, KY, is a full-service family-owned cooperage supplying new and used barrels to wine, spirits, and beer producers around the world. For more information, visit Kelvincooperage.com.

Additional media images and information are available at fourgatewhiskey.com